A low pressure system is approaching New South Wales from the west. A trough sits over western parts of the state and will move east ahead of the approaching low and cold front. This low and front is expected to bring unsettled weather to the region for a number of days. Showers and thunderstorms are expected in the central, western and south eastern districts from Friday, possibly severe with locally heavy falls.

Catchments likely to be affected by flooding are moderately wet.

The weather system is expected to cause flooding for the catchments listed from Saturday and into Sunday. Flood Classes (minor, moderate, major) are only defined for catchments where the Bureau provides a flood warning service.

Catchments likely to be affected include:
Orange, Molong and Bell River
minor flooding

For the latest flood and weather warnings see www.bom.gov.au/nsw/warnings/

For the latest rainfall and weather forecasts see www.bom.gov.au/australia/meteye/

This Flood Watch means that people living or working along rivers and streams must monitor the latest weather forecasts and warnings and be ready to move to higher ground should flooding develop.

Flood Warnings will be issued if Minor Flood Level is expected to be exceeded at key sites along the main rivers for which the Bureau of Meteorology provides a flood warning service.

Severe Weather Warnings will be issued or updated if very heavy rain is forecast or observed.

For emergency assistance call the SES on telephone number 132 500 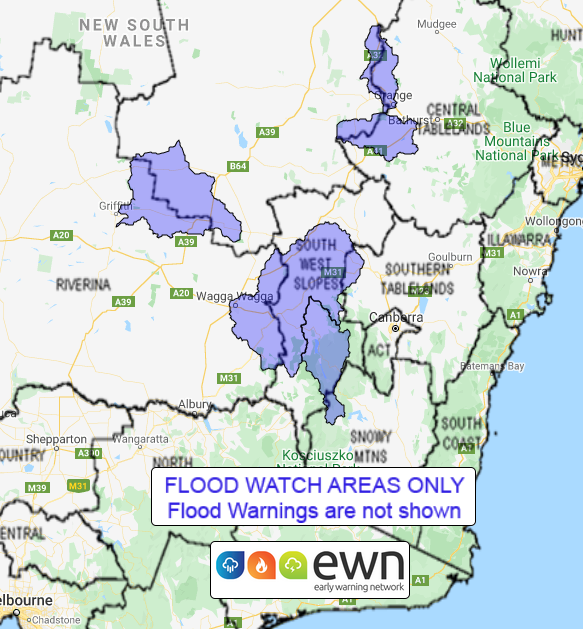