A low pressure system off the central part of New South Wales coast is forecast to bring rain and showers in the east, together with vigorous southerly winds and damaging surf conditions along southern and central parts of the coast today. The wet and windy conditions should ease Tuesday onwards as the low weakens and moves east.

A Severe Weather Warning has been issued for Illawarra, South Coast and parts of Metropolitan and Snowy Mountains Forecast Districts.

The weather system is expected to cause flooding for the catchments listed from late Monday onwards.
Flood Classes (minor, moderate, major) are only defined for catchments where the Bureau provides a flood warning service.

A flood warning is current for the Deua River.


Flooding is no longer expected in the following catchments: Upper Nepean River and Georges and Woronora Rivers.


For the latest flood and weather warnings see www.bom.gov.au/nsw/warnings/

For the latest rainfall and weather forecasts see www.bom.gov.au/australia/meteye/

For the latest rainfall and river level information see www.bom.gov.au/nsw/flood

Flood Safety Advice:
This Flood Watch means that people living or working along rivers and streams must monitor the latest weather forecasts and warnings and be ready to move to higher ground should flooding develop.

For more information on the Flood Watch Service:
http://www.bom.gov.au/water/floods/floodWarningServices.shtml

For emergency assistance call the SES on telephone number 132 500 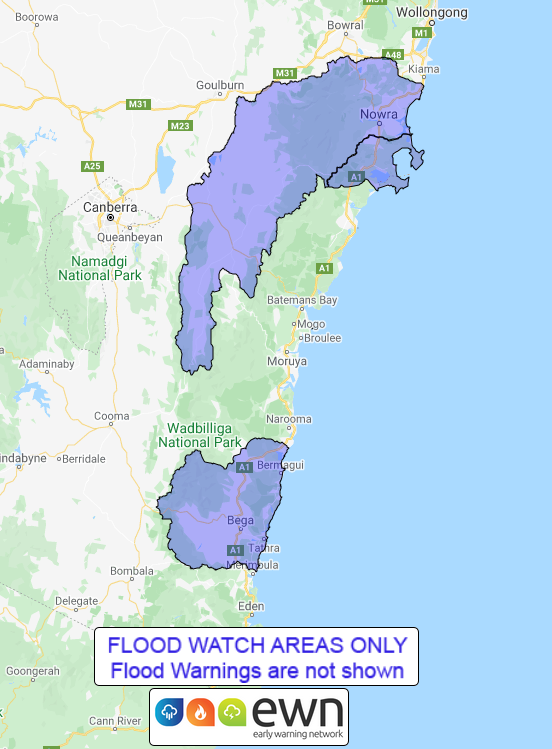