A strong cold front will cross New South Wales on Saturday, generating strong and gusty winds. Winds will ease during Sunday as the front moves away to the east.

DAMAGING WINDS, averaging 70 to 90 km/h with peak gusts in excess of 125 km/h are likely from early Saturday for Alpine peaks above 1900 metres.

DAMAGING WINDS for elevations less than 1900 metres, averaging 60 to 70 km/h with peak gusts in excess of 90 km/h are likely to develop from late Saturday morning about the Snowy Mountains, Southern Tablelands, South Coast and Illawarra districts, extending to parts of the Central Tablelands, Hunter, North West Slopes and Plains, Mid North Coast and Northern Tablelands during the afternoon and early evening.

Winds are then expected to ease from late Saturday evening into early Sunday.

Locations which may be affected include Wollongong, Nowra, Batemans Bay, Canberra, Goulburn, Armidale and Yass. 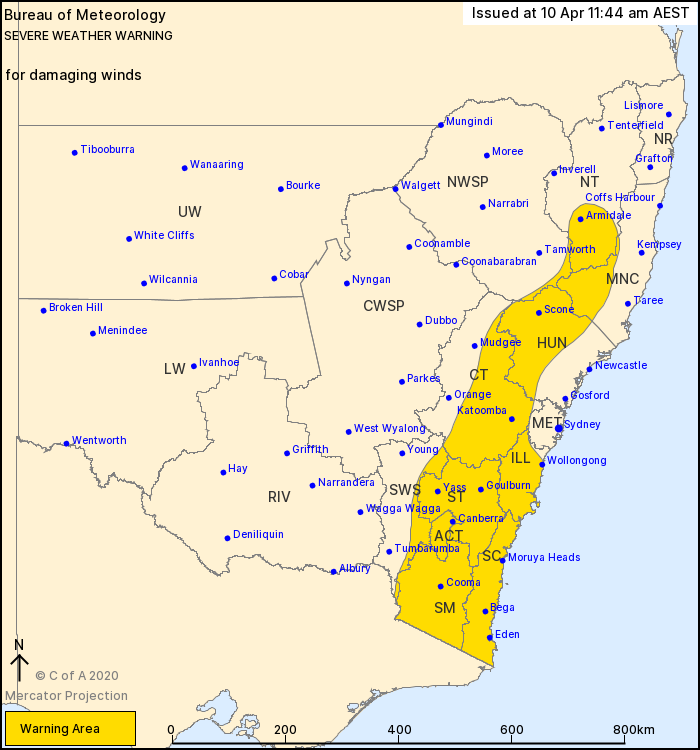