For people in parts of South West Slopes and Snowy Mountains Forecast Districts.

A strong cold front, currently over the Bight, will reach the state's west later Wednesday then move through central and eastern areas on Thursday, bringing strong winds to the Alpine region and widespread rainfall to parts of the ranges and western slopes.

HEAVY RAINFALL, which may lead to FLASH FLOODING, is forecast to develop over southern parts of the Southwest Slopes and adjacent ranges on Wednesday morning.

Isolated thunderstorms embedded within the rain band may locally enhance rainfall and bring DAMAGING WIND GUSTS in excess of 90 km/h.

Heavy rain and damaging winds are expected to ease a little as the front crosses the area during Thursday morning.

A Flood Watch has been issued for a number of catchments on the western slopes. A Flood Warning is also current for the Bogan River.

Locations which may be affected include Tumbarumba, Thredbo, Cabramurra, Selwyn, Tumut and Khancoban. 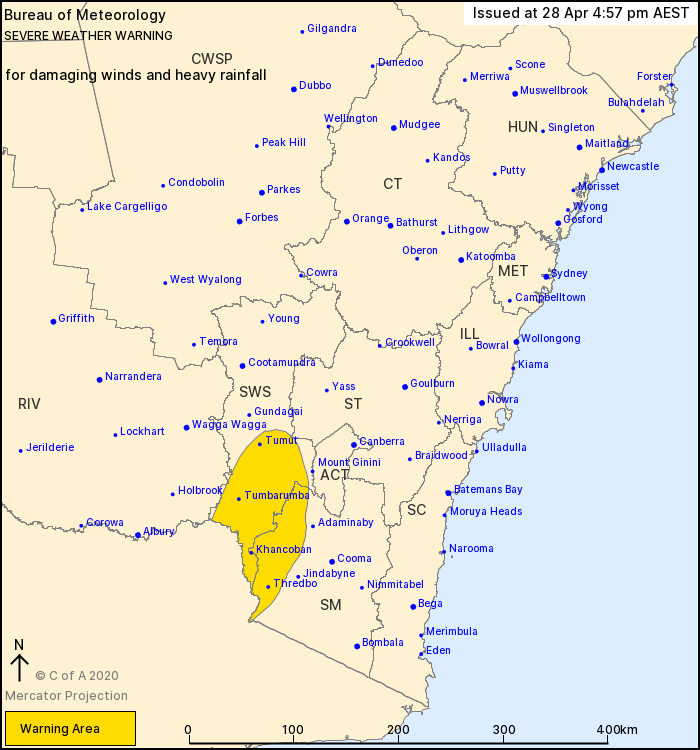