for DAMAGING WINDS and DAMAGING SURF

For people in parts of Metropolitan and Illawarra Forecast Districts.

VIGOROUS WINDS AND LARGE SURF WITH A COASTAL LOW

DAMAGING WINDS, averaging 60 to 70 km/h with peak gusts reaching 90 km/h, are possible along the Illawarra and Royal National Park coastal fringe today. Winds are expected to ease below warning threshold on Saturday as the low weakens slightly, although winds will still remain strong and gusty along the coast all weekend.

DAMAGING SURF CONDITIONS, with waves exceeding 5 metres in the surf zone, are possible for exposed coastal areas of the Illawarra and southern Sydney today, with the largest waves expected from tonight. This may produce localised damage and coastal erosion for these areas. Coastal areas exposed to a southerly swell will be most susceptible. Beach conditions in these areas could be dangerous and people should stay well away from the surf and surf exposed areas.

Dependent on the movement of the low, Damaging Surf conditions may persist into the weekend, and may also extend to affect other parts of the New South Wales coastline over the weekend.

A separate warning for Hazardous Surf Conditions is also current for much of the New South Wales coast.

Locations which may be affected include Wollongong, Bulli, Port Kembla, Kiama and Ulladulla. 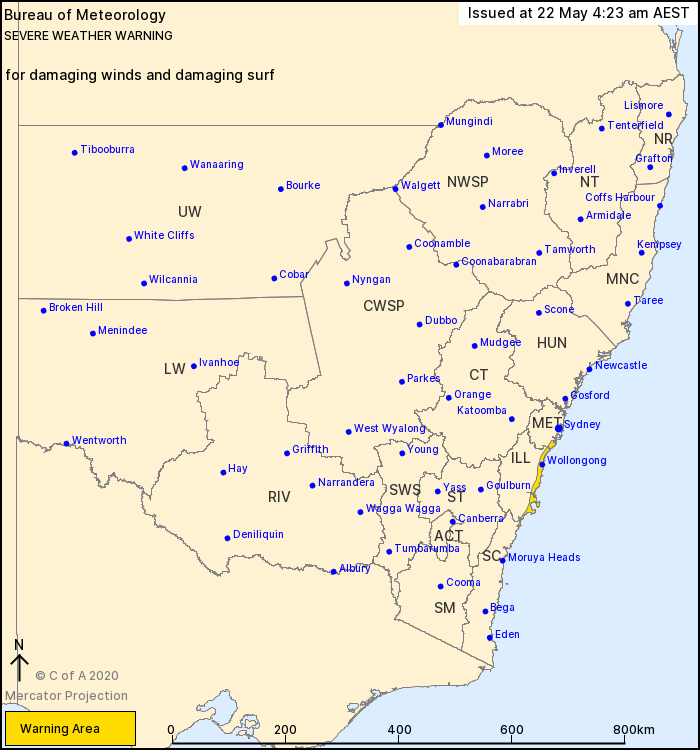