For people in South Coast and parts of Illawarra, Southern Tablelands and Snowy Mountains Forecast Districts.

Issued at 4:42 am Saturday, 8 August 2020.
HEAVY RAIN, FLOODING AND STRONG WINDS POSSIBLE FOR THE SOUTH COAST THIS WEEKEND

A low pressure system is forecast to deepen within a trough near the New South Wales coast today. This low looks set to linger throughout the weekend, bringing very wet and windy conditions to the southern half of the coast and adjacent ranges.
HEAVY RAINFALL which may lead to FLASH FLOODING and RIVERINE FLOODING is possible along the South Coast, southern parts of the Illawarra and eastern parts of the Snowy Mountains and Southern Tablelands forecast districts on Saturday. Heavy rainfall is likely to continue throughout Sunday and possibly into early Monday, as the low pressure system lingers nearby.
Embedded thunderstorm activity along the coastal fringe on Saturday may also locally enhance rainfall, leading to FLASH FLOODING.

A Flood Watch is current for the South Coast river catchments. This includes the risk of Moderate to Major flooding. See http://www.bom.gov.au/nsw/warnings/flood/floodwatch1.shtml for more information.
DAMAGING WINDS, averaging 60 to 70 km/h with peak gusts in excess of 90 km/h, are also possible along the coastal fringe of the South Coast district from Saturday evening.

Locations which may be affected include Nowra, Batemans Bay, Eden, Bega, Moruya Heads and Bombala.

Severe weather is no longer occurring in the South West Slopes district and the warning for this district is CANCELLED. 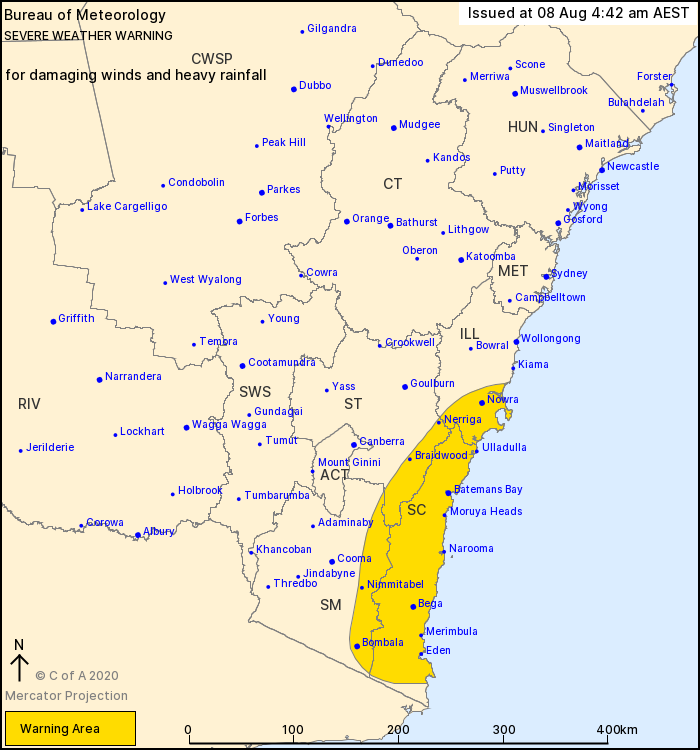