HEAVY RAIN IN THE SOUTHEAST. COASTAL WINDS AND SURF TO INCREASE

A trough along the New South Wales coast is deepening with multiple low centres developing within the trough. This system is currently bringing widespread rain to the southern half of the coast, and is set to bring increased winds and surf along the coast as well this afternoon as the low centres make landfall.

HEAVY RAINFALL, which is leading to RIVERINE FLOODING, is forecast to continue for the Illawarra, northern half of the South Coast, and eastern parts of the Snowy Mountains and Southern Tablelands districts today. The areas of heavy falls may extend to the Sydney Metropolitan area and the Central Coast later this afternoon depending on the position and the movement of the lows. Thunderstorms embedded in the rain or any development of a small scale lows within the trough may exacerbate the rain rate leading to FLASH FLOODING. The rain should ease around this evening as the trough starts to move northwards later tonight or early Monday.

Moderate to Major Flood Warnings are current for some of the South Coast river catchments. See http://www.bom.gov.au/nsw/warnings/index.shtml for more information.

DAMAGING WINDS, averaging 60 to 70 km/h with gusts in excess of 90 km/h, are likely to develop on the coastal fringe of Illawarra and the South Coast this afternoon, before extending to the coastal fringe of the Sydney Metropolitan area and parts of the Central Coast during the late afternoon or early evening.

VERY HEAVY SURF which may lead to localised damage and coastal erosion is also possible in association with the strengthening winds along the coastal parts of Illawarra and the South Coast from late Sunday. Beach conditions in these areas could be dangerous and people should stay well away from the surf and surf exposed areas.

As the system moves northwards, the areas of damaging winds and heavy surf will shift to the northern and central parts of the coast north of point perpendicular from early Monday.

Rainfall totals for the 24 hours to 9am Saturday:

Rainfall totals since 9am Saturday till 5am Sunday: 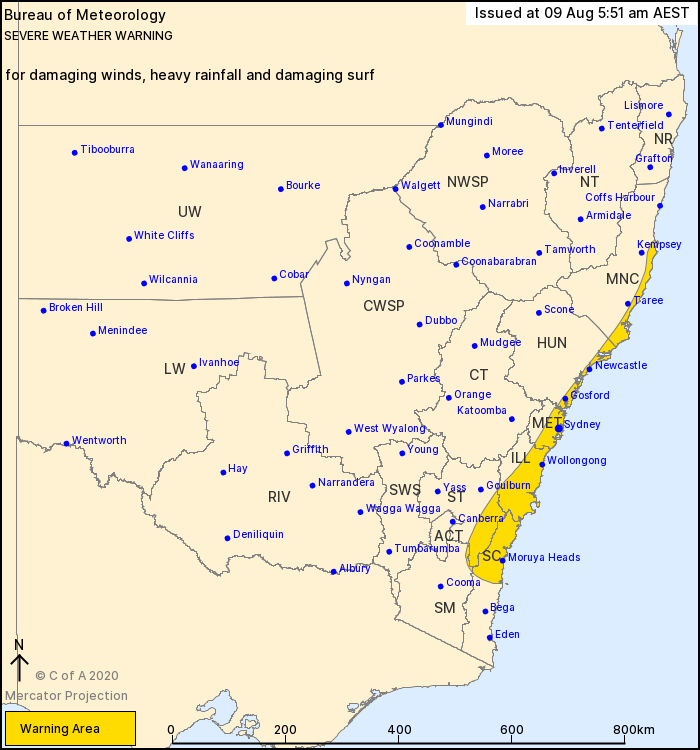