A trough along the New South Wales coast, together with multiple low centres within the trough, are bringing increased winds and surf along the southern and central parts of the coast. The areas of winds and surf should shift to the northern coast on Monday as the system heads north.

DAMAGING WINDS, averaging 60 to 70 km/h with gusts in excess of 90 km/h, are currently occurring about the Illawarra and Sydney coast,and forecast to extend to the Hunter coast this morning, before extending to the Mid North Coast in the afternoon.

DAMAGING SURF, with waves exceeding 5 metres in the surf zone, may lead to significant beach erosion along coastal parts of the Illawarra, Sydney and Hunter coast this morning, and forecast to extend further north to Smoky Cape this afternoon. Beach conditions in these areas could be dangerous and people should stay well away from the surf and surf exposed areas. Surf conditions should ease in the south later Monday, but hazardous surf conditions should persist until Tuesday.
In conjunction with DAMAGING SURF, a Hazardous Surf Warning is also current. See http://www.bom.gov.au/nsw/warnings/hazardoussurf.shtml

Locations which may be affected include Port Macquarie, Newcastle, the Central Coast, Sydney, Wollongong, Huskisson and Ulladulla.

Severe weather is no longer occurring in the South Coast district and the warning for this district is CANCELLED.
Wind gust observations on Monday: 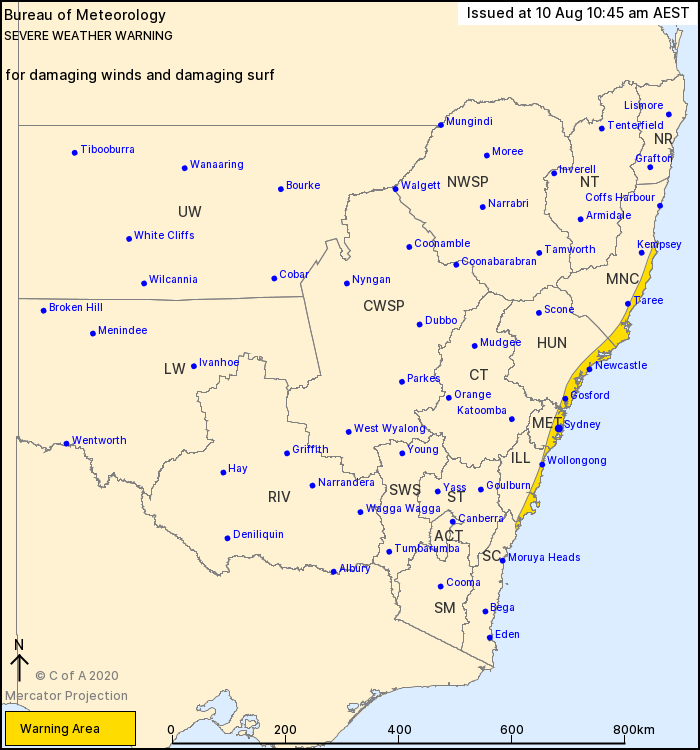