Weather Situation: Ex-Tropical Cyclone Esther, currently near the Northern Territory/South Australia/Queensland border, is approaching New South Wales and deepening a low pressure trough over the western inland. Widespread rain is expected across the inland and southeast of New South Wales today as this trough deepens. Rain is likely to intensify tonight and during Thursday as the remnants of Esther move across the state.
HEAVY RAINFALL which may lead to FLASH FLOODING is possible across parts of inland and southeast New South Wales today and Thursday. Locally heavy rain is possible today, however the heaviest rain is expected for most areas from this evening and/or during Thursday.

Thunderstorms are also possible, and likely to exacerbate rainfall rates and totals where they occur. LOCALLY INTENSE RAINFALL is possible with thunderstorms.
For areas recently affected by fires, heavy rainfall increases the potential for landslips and debris across roads.

A Flood Watch is current for the Murrumbidgee, Tumut, Queanbeyan and Belubula Rivers. In addition, Flood Warnings remain current for river systems across the northern inland.
Conditions will ease across western parts of New South Wales during Thursday as the system moves further east. By Friday morning the rainband will have shifted into the Tasman Sea, though showers and thunderstorms are expected to continue across much of the ranges and coast into Friday afternoon and evening.

Locations which may be affected include Canberra, Wagga Wagga, Albury, Tibooburra, Cobar and Bourke. 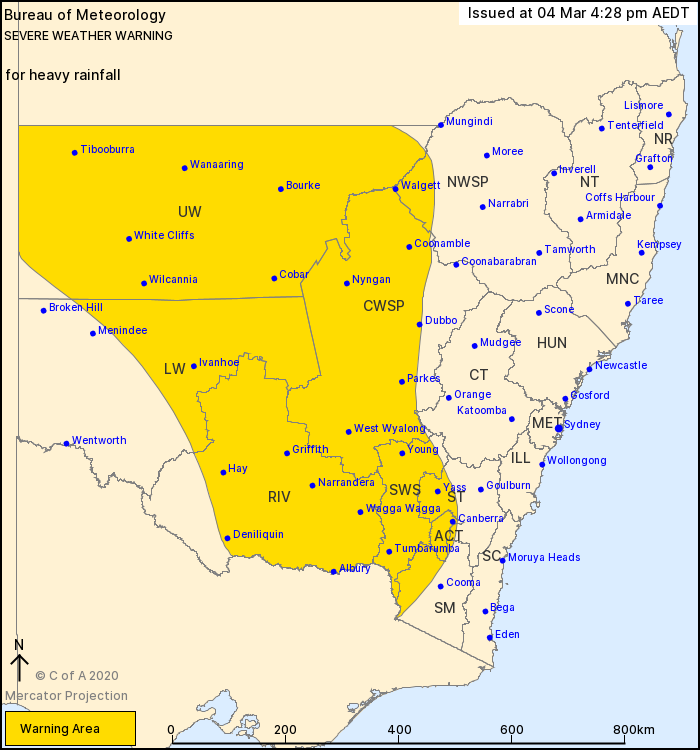