For people in Illawarra, South Coast and parts of Metropolitan and Snowy Mountains Forecast Districts.

A low pressure system currently just off the Illawarra coast is maturing and slow moving, while bringing damaging wind gusts and wind-driven large sea waves along the southern coast. The winds and waves may extend north to Sydney and possibly up to the Central Coast this afternoon, before easing later this evening or early Tuesday as the low gradually weakens.

DAMAGING WINDS, averaging 60 to 70 km/h with peak gusts in excess of 90 km/h are expected along the coastal parts of the Illawarra and the South Coast districts, and are likely to extend to the Sydney coast and possibly up to the Central Coast this afternoon. Damaging wind gusts over the Southern Highlands and the coastal ranges of South Coast are also possible. Winds should gradually ease later this evening or early tomorrow as the low gradually weakens.

In addition, Hazardous Surf Warning is current, covering the coastal areas from the South Coast to Hunter Coast. See http://www.bom.gov.au/nsw/warnings/hazardoussurf.shtml

HEAVY RAINFALL, which may lead to localised flash flooding, is also possible over the Illawarra and the South Coast districts this morning. Rain rate should ease from this afternoon, although steady rainfall will still continue.

Locations which may be affected include Sydney, Wollongong, Nowra, Bowral, Batemans Bay and Eden. 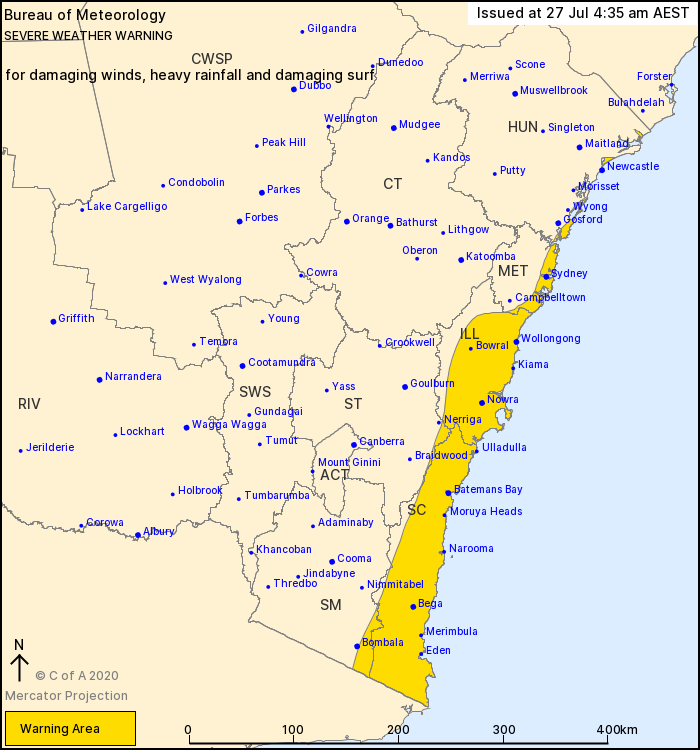