For people in parts of Carpentaria and Barkly districts.

Weather Situation: Tropical Cyclone Esther made landfall near the NT/QLD border earlier Monday. At 04:00 AEST, Tropical Cyclone Esther is located about 145 kilometres west of Mornington Island and 180 kilometres southeast of Borroloola, moving towards the west southwest at 14 kilometres per hour. As the system moves further inland it is expected to weaken below tropical cyclone strength. Squally thunderstorms with heavy rainfall are likely to continue even after the system weakens below tropical cyclone strength.
A Tropical Cyclone Warning remains in place for coastal areas of the Carpentaria District.

DAMAGING WINDS, averaging 60 to 70 km/h with peak gusts of around 100 km/h are likely in the eastern Carpentaria and northeastern Barkly Districts during this evening. The area at risk of damaging winds will extend further west into central parts of the Carpentaria and northern parts of the Barkly Districts overnight and into Tuesday. The strongest winds are likely to be associated with squally showers and thunderstorms.

HEAVY RAINFALL which may lead to FLASH FLOODING may develop in the eastern Carpentaria and far northeastern Barkly Districts during this evening. The area at risk of heavy rainfall will extend further west into central parts of the Carpentaria and northern parts of the Barkly Districts overnight and into Tuesday. The heaviest rainfall are likely to be associated with squally showers and thunderstorms.

Locations which may be affected include Borroloola, Brunette Downs, Cresswell Downs, Avon Downs and Wollogorang. 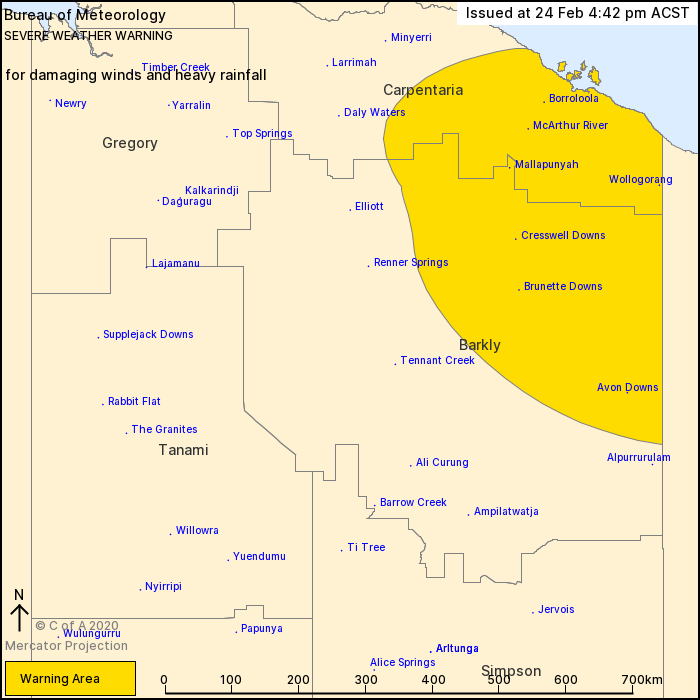