Flooding is likely across parts of the Flood Watch area from Wednesday.

Heavy rainfall associated with a tropical low over the western Cape York Peninsula will affect the Flood Watch area during Wednesday and Thursday. The rainfall is likely to be heaviest over central parts of the Peninsula Forecast District, extending southeastward later tonight and into Thursday.

Heavy rainfall has fallen intermittently over the Flood Watch area over the last few weeks. In the 24 hours to 9am Wednesday, several locations over the Cape York Peninsula have recorded rainfall in excess of 100 mm, with 240 mm recorded at Southwell Station (north of Kowanyama). Catchments are wet and rivers will respond relatively quickly to further rainfall.

Riverine flooding is likely within the Flood Watch area, particularly across central parts of the Peninsula Forecast District where the rainfall is expected to be heaviest.

Localised flooding, isolation of communities and disruption to transport routes are likely within the Flood Watch area over the next few days.

A Severe Weather Warning for heavy rainfall is current for parts of the Peninsula Forecast District.

Catchments likely to be affected include:
Jardine River

This Flood Watch means that people living or working along rivers and creeks should monitor the latest weather forecasts and warnings. 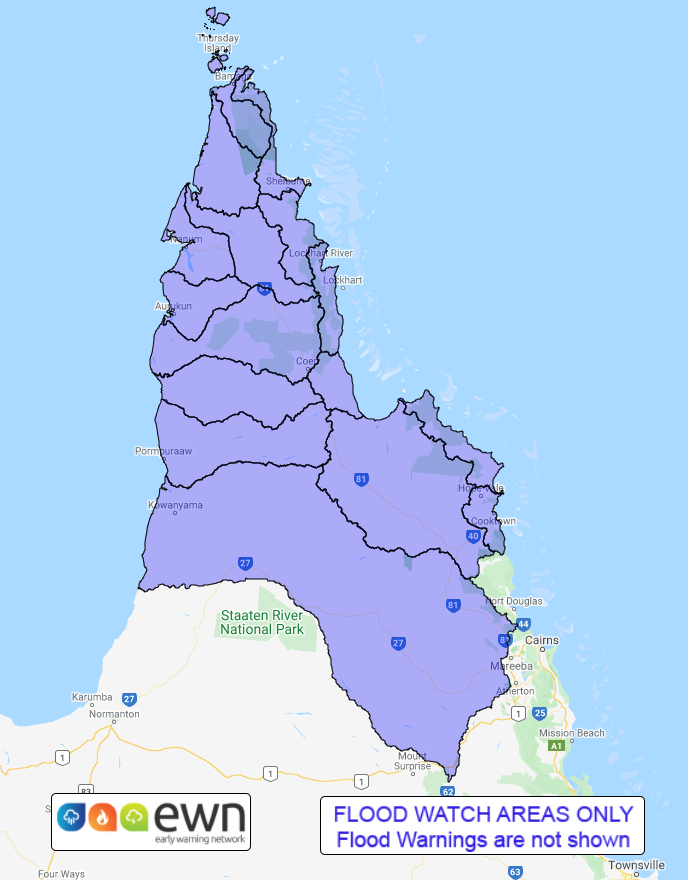