For people in Central Highlands and Coalfields and parts of Northern Goldfields and Upper Flinders, Herbert and Lower Burdekin, Central West, Maranoa and Warrego and Darling Downs and Granite Belt Forecast Districts.

Severe thunderstorms are likely to produce heavy rainfall that may lead to flash flooding and damaging winds in the warning area over the next several hours. Locations which may be affected include Emerald, Clermont, Charters Towers, Blackwater, Moranbah, Taroom, Rolleston, Springsure, Pentland, Dysart, Mingela and Carnarvon National Park.

83mm was recorded in the 3 hours to 6pm at Mt Lindsay (southeast of Tambo).

80mm was recorded in the 2 hours to 7.30pm at Doogoolarah (southwest of Rolleston).

58mm was recorded in the hour to 5pm at Barngo Crossing (northeast of Charleville).

53mm was recorded in the hour to 4.30pm at Bogarella Crossing (northeast of Charleville). 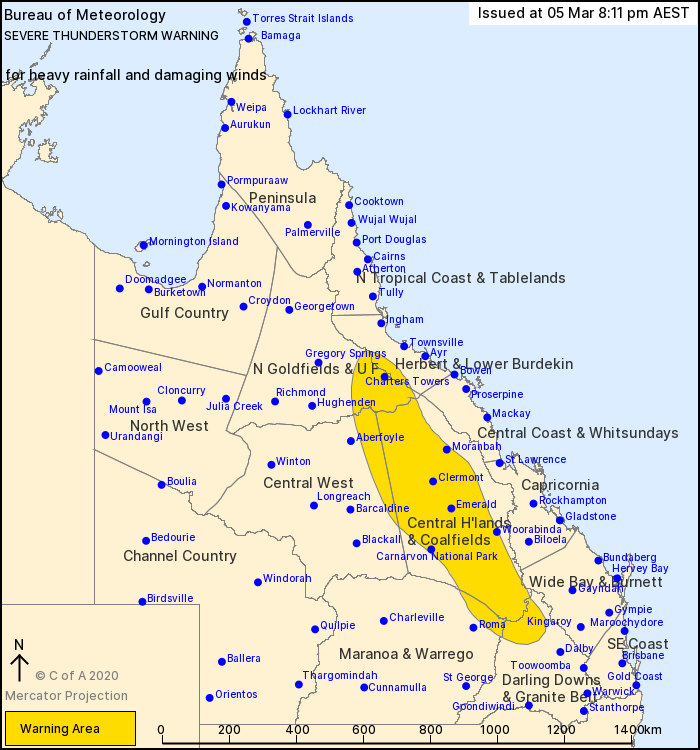