For people in Capricornia and parts of North Tropical Coast and Tablelands, Northern Goldfields and Upper Flinders, Herbert and Lower Burdekin and Central Highlands and Coalfields Forecast Districts.

Severe thunderstorms developing over the Capricornia

Weather Situation: A southeasterly wind surge is triggering thunderstorms about the Capricornia. Slow moving, heavy thunderstorms in a moist and unstable airmass about the northeast of the state.

Severe thunderstorms are likely to produce heavy rainfall that may lead to flash flooding and damaging winds over the next several hours in the Capricornia and parts of the Central Highlands and Coalfields districts. Locations which may be affected include Gladstone, Rockhampton, Yeppoon, Marlborough, Byfield, Calliope and Mount Morgan.

Severe thunderstorms are likely to produce heavy rainfall that may lead to flash flooding over the next several hours in parts of the North Tropical Coast and Tablelands, Northern Goldfields and Upper Flinders and Herbert and Lower Burdekin districts. Locations which may be affected include Abergowrie.

Severe thunderstorms are no longer occurring in the Wide Bay and Burnett district and the warning for this district is CANCELLED. 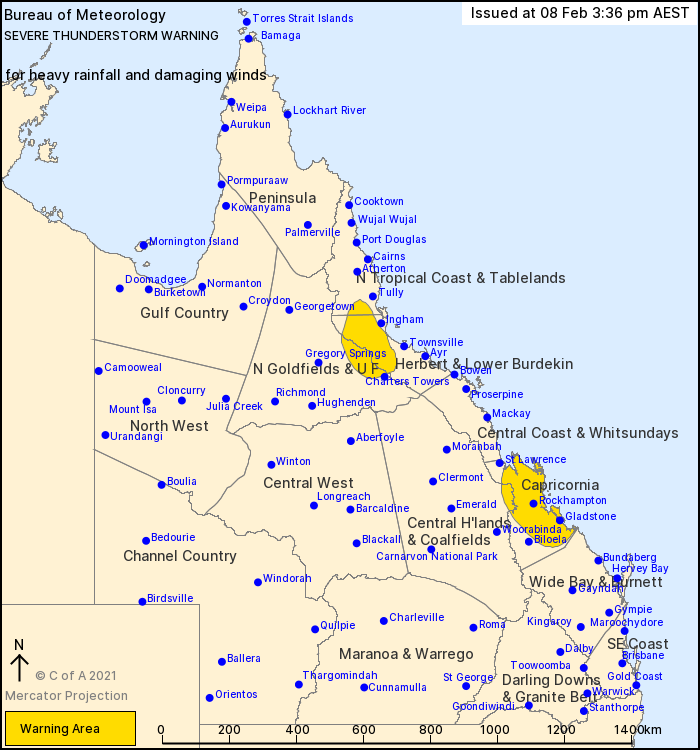