For people in parts of Central Highlands and Coalfields, Wide Bay and Burnett, Darling Downs and Granite Belt and Southeast Coast Forecast Districts.

Severe thunderstorms are now developing across the southeastern quarter of the state.

Weather Situation: A southeasterly change has recently moved into the Southeast Coast district. This system will combine with an inland trough and dryline to produce severe thunderstorms across the warning area over the next several hours. A marginal supercell or two is possible, particularly the zone extending from Oakington and Boonah northward through to Gatton and Kilcoy.

Severe thunderstorms with damaging winds, large hailstones and heavy rainfall that may lead to flash flooding are possible in parts of the Wide Bay and Burnett, Darling Downs and Granite Belt and Southeast Coast districts. Locations which may be affected include Warwick, Ipswich, Stanthorpe, Boonah, Crows Nest, Allora, Clifton, Esk, Gatton, Kilcoy, Laidley and Lowood.

Severe thunderstorms with damaging winds are possible in parts of the Central Highlands and Coalfields district. Locations which may be affected include Rolleston and Springsure. 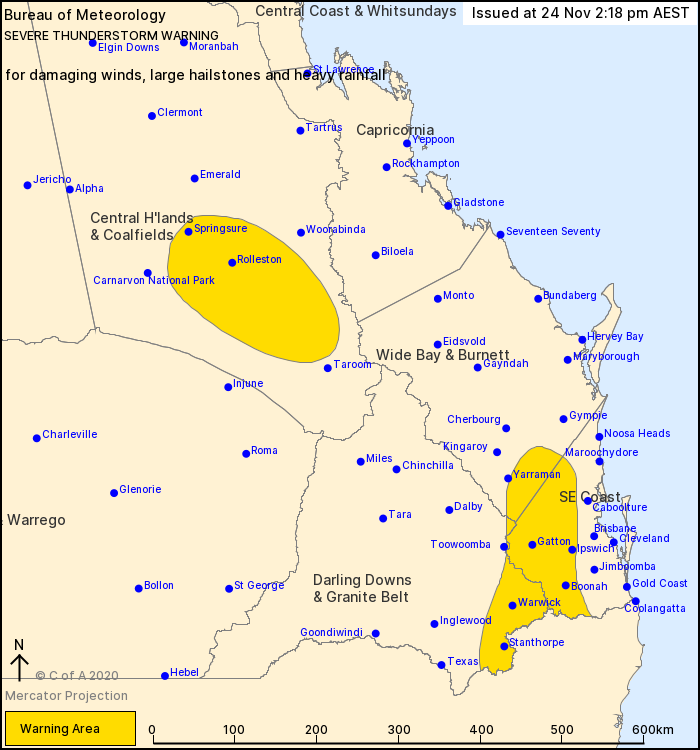