For people in Maranoa and Warrego and parts of Darling Downs and Granite Belt Forecast Districts.

Weather Situation: Ex-tropical cyclone Esther is currently located just to the northeast of Thargomindah and will continue moving to the southeast, reaching the QLD/NSW border late this morning and then further southeast into NSW. The system is interacting with an upper trough currently moving across South Australia to bring widespread rainfall and the potential for damaging winds to southern inland Queensland.
While the risk of widespread heavy rainfall and damaging winds will contract south during today, the event is expected to transition into scattered severe thunderstorm activity over a similar area and further east to the western Darling Downs during this afternoon and evening.
HEAVY RAINFALL which may lead to FLASH FLOODING is possible through the warning area during this morning, before contracting southeastwards. Widespread 6 hourly totals of 50-100mm are possible.

LOCALLY DAMAGING WINDS with peak gusts of around 90km/h are possible through this morning.

A separate flood watch is in place for rivers and creeks in southwestern Queensland [ see http://www.bom.gov.au/cgi-bin/wrap fwo.pl?IDQ20900.html ].
Locations which may be affected include Charleville, Cunnamulla, Bollon, Dirranbandi, Wyandra and Hebel.

Severe weather is no longer occurring in the Central West and Channel Country districts and the warning for these districts is CANCELLED.
Since 9am on 4/3/20 124mm has been recorded at Thargomindah, 86 mm at Windorah and 83 mm at Autumnvale.

Queensland Fire and Emergency Services advises that people should:
* Move your car under cover or away from trees.
* Secure loose outdoor items.
* Seek shelter, preferably indoors and never under trees.
* Beware of fallen trees and powerlines.
* Never drive, walk or ride through flood waters. If it's flooded, forget it.
* Keep clear of creeks and storm drains.
* For emergency assistance contact the SES on 132 500. 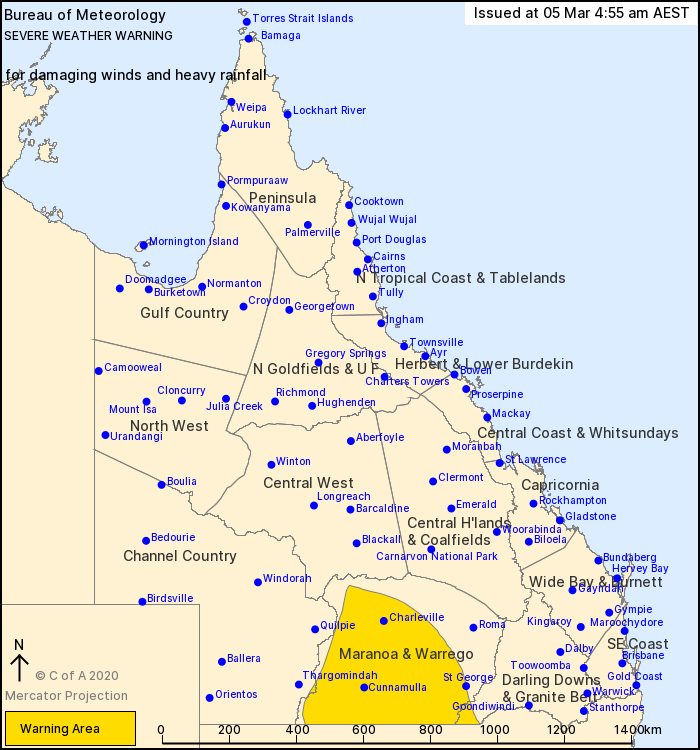