For people in parts of Peninsula and North Tropical Coast and Tablelands Forecast Districts.

Weather Situation: At 4pm AEST, a tropical low was analysed over central Cape York Peninsula, roughly 120 kilometres northwest of Palmerville. The low is forecast to meander across the Peninsula district tonight and through Thursday before potentially tracking eastwards off the coast and into the northern Coral Sea late on Friday or Saturday.
HEAVY RAINFALL which may lead to FLASH FLOODING is forecast to continue across Cape York Peninsula today and through Thursday over central parts of the Peninsula district. Localised six hourly rainfall totals between 140mm to 180mm are likely within the warning area.
Currently the heaviest rainfall is extending from Cape Keerweer to Musgrave. These bands should extend southeastward towards Palmerville and Laura later tonight and into Thursday.
Locations which may be affected include Coen, Palmerville, Musgrave, Hope Vale and Laura.
24 hour rainfall totals to 9am:
240mm at Southwell Station (north of Kowanyama)
121mm at Aurukun

Queensland Fire and Emergency Services advises that people should:
* Never drive, walk or ride through flood waters. If it's flooded, forget it.
* Keep clear of creeks and storm drains.
* For emergency assistance contact the SES on 132 500. 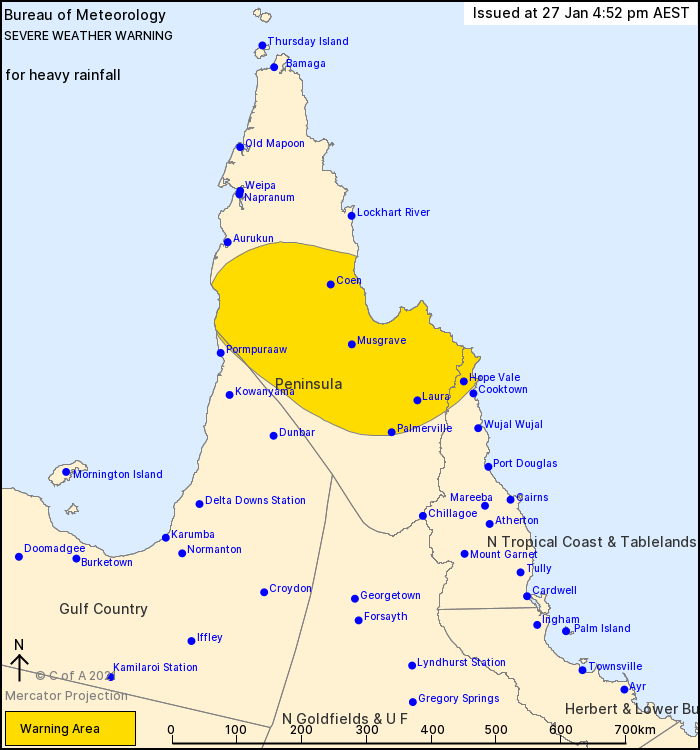