Mornington Island to Aurukun including Kowanyama and Pormpuraaw.
Cancelled Zone

Location: within 45 kilometres of 15.4 degrees South 139.5 degrees East, estimated to be 145 kilometres north northeast of Mornington Island and 240 kilometres west of Kowanyama.

Movement: east at 11 kilometres per hour.

The tropical low is expected to move slowly towards the Qld coast and develop into a tropical cyclone later on Wednesday or Thursday. The system should remain slow moving in the southeastern region of the Gulf of Carpentaria for several days, beyond that there uncertainty whether it will cross over Cape York Peninsula or head towards the Northern Territory.
Hazards:

HEAVY RAINFALL is forecast about western parts of Cape York Peninsula for the next several days with the potential for 150 to 200 millimetres per day for multiple days. The most likely areas to see these rainfall totals will be coastal parts between Weipa and Gilbert River Mouth.

A STORM TIDE between Thursday Island and Gilbert River Mouth is expected over the next several days due to persistent monsoonal westerly flow and the developing tropical low. Tides rising above the normal high tide level are expected on this afternoon's high tide, becoming more likely on Wednesday and Thursday. Large waves may produce minor flooding along the foreshore on Thursday south of Weipa. People living in areas likely to be affected by this flooding should take measures to protect their property as much as possible and be prepared to help their neighbours.

GALES with gusts to 110 kilometres per hour may develop about coastal and island communities between Aurukun to Karumba and also Mornington Island later Wednesday into Thursday morning.
Recommended Action:

People between Aurukun and Karumba and on Mornington Island should consider what action they will need to take if the cyclone threat increases. 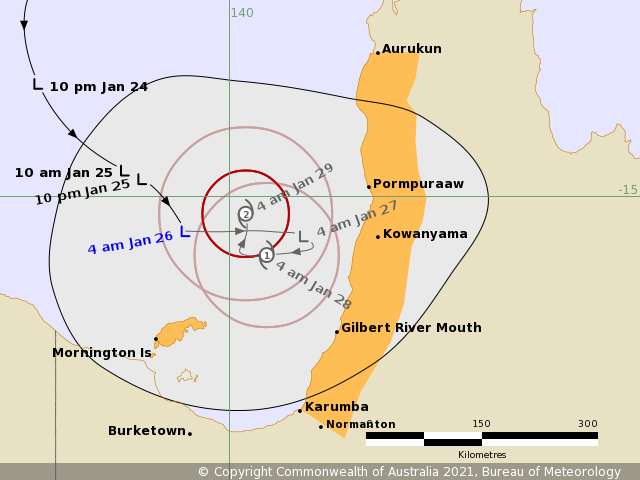