Weather Situation: A vigorous north to northwesterly wind flow will develop ahead of a front crossing the State overnight, bringing a localised damaging wind threat. Strong to locally damaging northwesterly winds and squally showers will persist through Thursday about southern coastal districts, associated with a deep low and second front.

Strong to locally damaging north to northwesterly winds, with peak gusts of around 90-100 km/h are forecast to affect parts of Eyre Peninsula from around midnight tonight. These winds will extend across the remainder of the warning area during the early hours of Thursday, while contracting from the west.

The greatest risk of damaging winds overnight will be about and in the lee of elevated terrain and with any shower activity.
Winds will remain fresh to strong and gusty across the south and east of the State during
Thursday, however the risk of damaging winds will contract to southern coastal districts, including the Mount Lofty Ranges. Across these areas damaging winds averaging 50-70 km/h with peak gusts in excess of 90 km/h are possible from late Thursday morning, particularly with squally showers and possible thunderstorms. 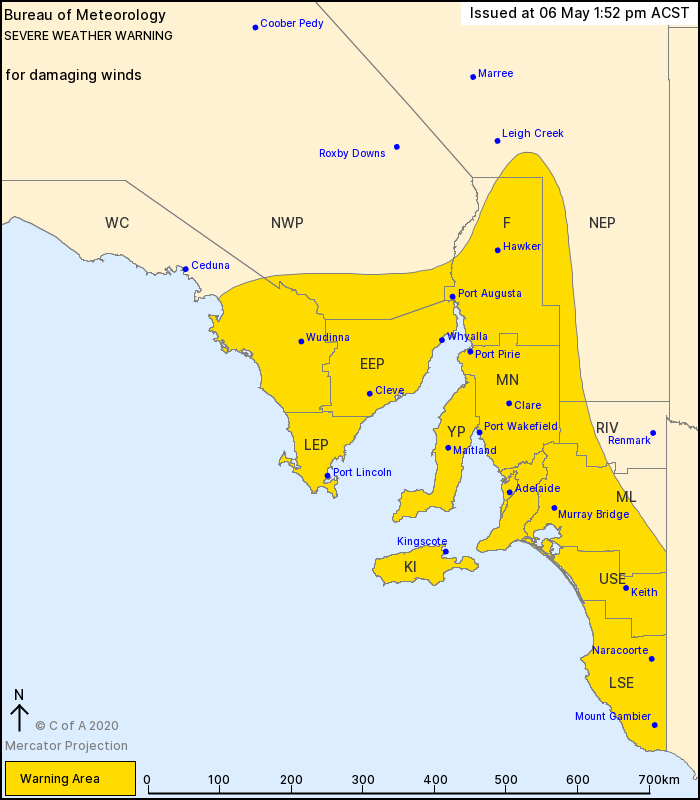