Issued at 10:01 am Thursday, 4 February 2021.
VERY HEAVY RAIN EXPECTED ACROSS PARTS OF NORTHERN TASMANIA FROM FRIDAY AFTERNOON TO SATURDAY MORNING

Weather Situation:
Rain begins to develop across the northern half of Tasmania during Friday as a very humid north to northeasterly airstream develops over the state. The rain is expected to become heavy during Friday afternoon as the airstream strengthens and interacts with the mountains. Thunderstorms are also expected within the rainband and may deliver isolated, heavier rainfall. The heavy rain is expected to ease during Saturday morning as a trough crosses, bringing northwesterly winds to the area.

HEAVY RAINFALL which may lead to FLASH FLOODING is expected across parts of the northern half of Tasmania from Friday afternoon to Saturday morning. with more INTENSE RAINFALL possible across elevated areas across the North West and Central Plateau.
During Friday evening to Saturday morning, 40mm to 80mm of rainfall is possible across much of the northern half of Tasmania. However much higher rainfall of around 100mm to 200mm is possible across elevated areas, including the Western Tiers and Northeast Highlands
high elevations in the north and northwest, with over 150mm possible across the Western Tiers. THUNDERSTORMS are also expected with the rain and may bring isolated heavier rainfall across the whole area.

The heavy rain is expected to ease during Saturday morning.
Note that recent rainfall has left catchments across the north relatively wet, so RAPID RIVER AND RIVULET RISES ARE LIKELY late Friday and during Saturday - please check the riverine flood watch and flood warnings at www.bom.gov.au/tas/warnings

Locations which may be affected include Devonport, Burnie, Smithton, Launceston, Scottsdale and St Helens.

The State Emergency Service advises that people should:
* Supervise children closely.
* Check that family and neighbours are aware of warnings.
* Manage pets and livestock.
* Clear drains and gutters on premises prior to severe weather arriving.
* Do not walk, ride or drive through flood waters.
* Be prepared in case of power outages and report any outages to TasNetworks on 132 004.
* Listen to the ABC radio or check www.ses.tas.gov.au for further advice.
* For emergency assistance contact the SES on 132500. 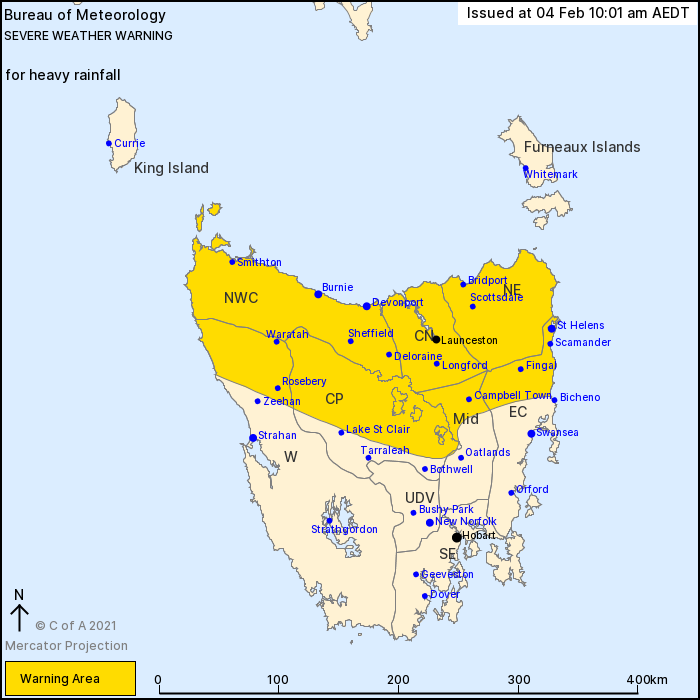