DAMAGING NORTHERlY WINDS, averaging 40 to 60 km/h with peak gusts of around 90 km/h are likely to develop along the central ranges later Tuesday morning including the Dandenongs. These stronger winds are also possible into parts of the northern metropolitan area during the late morning and early afternoon.

DAMAGING NORTHERLY WINDS, averaging 40 to 70 km/h with peak gusts to 100 km/h are likely to develop over the eastern ranges, generally above 1000 metres during Tuesday afternoon.

Northerly winds across central and eastern Victoria easing with the passage of the front in the afternoon and evening.

Locations which may be affected include Horsham, Hamilton, Warrnambool, Portland, Wonthaggi and Falls Creek.

The State Emergency Service advises that people should:
* Be aware that trees that have been damaged by heat or fire may be unstable and more likely to fall when it is windy or wet.
* Check that loose items such as outdoor settings, umbrellas and trampolines are safely secured and move vehicles under cover or away from trees.
* Stay indoors and away from windows.
* If outdoors, move to a safe place indoors. Stay away from trees, drains, gutters, creeks and waterways.
* If driving conditions are dangerous, safely pull over away from trees, drains, low-lying areas and floodwater. Avoid travel if possible.
* Stay safe by avoiding dangerous hazards, such as floodwater, mud, debris, damaged roads and fallen trees.
* Stay away from fallen powerlines always assume they are live.
* Stay informed monitor weather warnings, forecasts and river levels at the Bureau of Meteorology website, and warnings through VicEmergency. 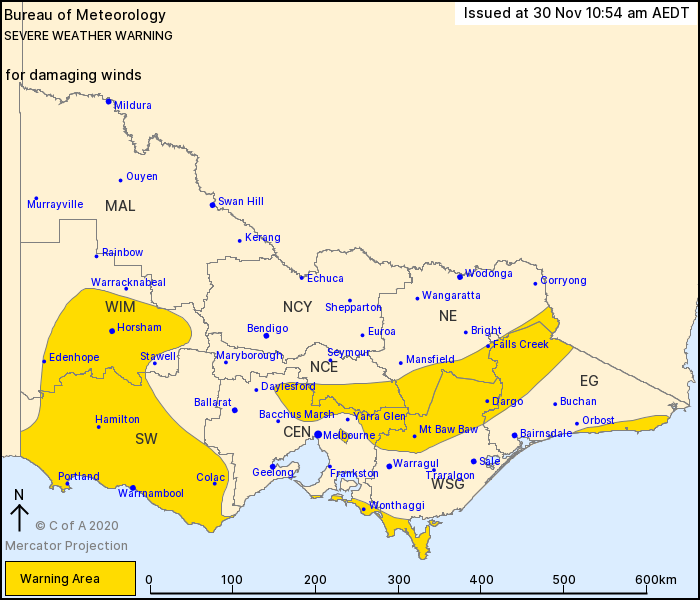