For people in parts of East Gippsland and North East Forecast Districts.

Issued at 11:54 am Monday, 23 November 2020.
Heavy rainfall continuing in the east of Victoria

Weather Situation:
A trough will clear eastern Victoria this afternoon.
Areas of HEAVY RAINFALL which may lead to FLASH FLOODING have affected southern Victoria overnight and this morning. HEAVY RAINFALL is now moving through Gippsland and the eastern ranges. Further rainfall totals up to 50-60mm are possible within the warning area.

Heavy rainfall will clear the east later this afternoon.

Locations which may be affected include Buchan, Chandlers Creek, Combienbar, Gelantipy and Bonang.

Severe weather is no longer occurring in the West and South Gippsland district and the warning for this district is CANCELLED.

Since 9am Sunday morning highest rainfall totals have included 66mm at Mt Donna Buang, 64mm at Warburton and Bunyip River, and 63mm at Moorabbin Airport
Moorabbin Airport recorded 44mm in 3 hours this morning which is around a 1 in 10 year rainfall rate. 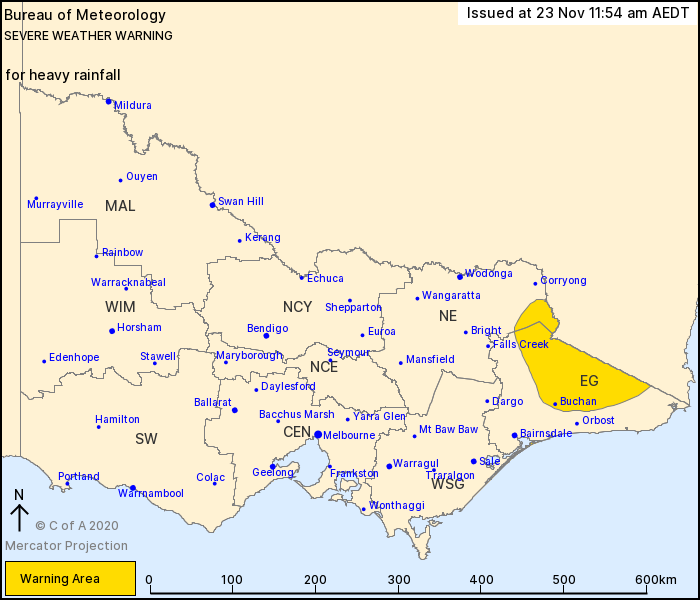