Issued at 11:27 am Wednesday, 3 March 2021.
Severe thunderstorms producing heavy rainfall, with a chance of damaging winds and large hailstones.

Weather Situation: At 11:00 am WST radar imagery showed an area of heavy rainfall extending from Dalwallinu to York and moving south. Thunderstorms are expected to become more frequent across the warning area over the next few hours.

Severe thunderstorms are likely to produce HEAVY RAINFALL that may lead to DANGEROUS FLASH FLOODING in the warning area over the next several hours. There is also a risk that storms developing this afternoon may produce DAMAGING WINDS and LARGE HAILSTONES.
Locations which may be affected include Meekatharra, Merredin, Mount Magnet, Northam, Wongan Hills, Narrogin and Yalgoo.
Storms could be more intense than usual, with rainfall rates that are higher than typically seen at this time of year. Storms could cause DAMAGE TO HOMES AND PROPERTY.
Since 9:00 am Wednesday morning the following rainfall totals have been recorded:
- Northam: 40mm
- Long Forest: 31mm
- Wongan Hills: 31mm 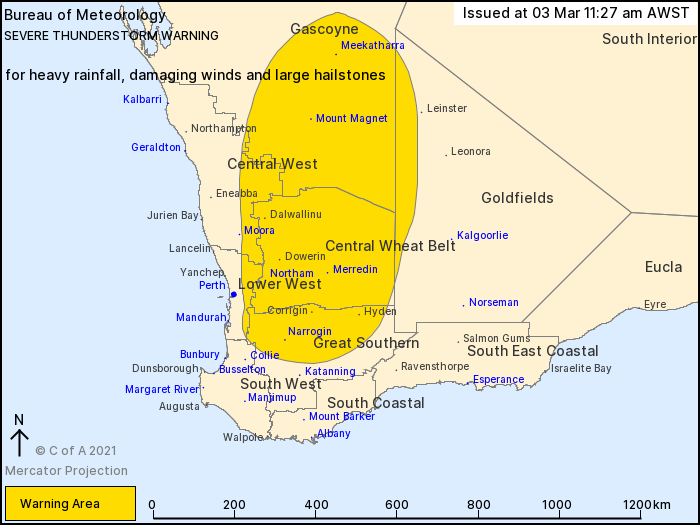