Weather Situation: At 1:30 pm WST radar imagery showed an area of active thunderstorms through the Central West, southern Gascoyne and northern parts of the Central Wheat Belt, moving towards the south. Heavy rainfall is also occurring through western parts of the Central Wheat Belt and Great Southern. Thunderstorms are expected to become more frequent throughout the warning area this afternoon.
Severe thunderstorms are likely to produce HEAVY RAINFALL that may lead to DANGEROUS FLASH FLOODING, DAMAGING WINDS and LARGE HAILSTONES.
Locations which may be affected include Geraldton, Meekatharra, Merredin, Moora, Mount Magnet, Narrogin and Northam.
Storms could be more intense than usual, with rainfall rates that are higher than typically seen at this time of year. Storms could cause DAMAGE TO HOMES AND PROPERTY.
Since 9:00 am Wednesday morning the following rainfall totals have been recorded:
- Northam: 59.2mm
- Muresk: 55.8mm
- Wongan Hills: 33.8mm 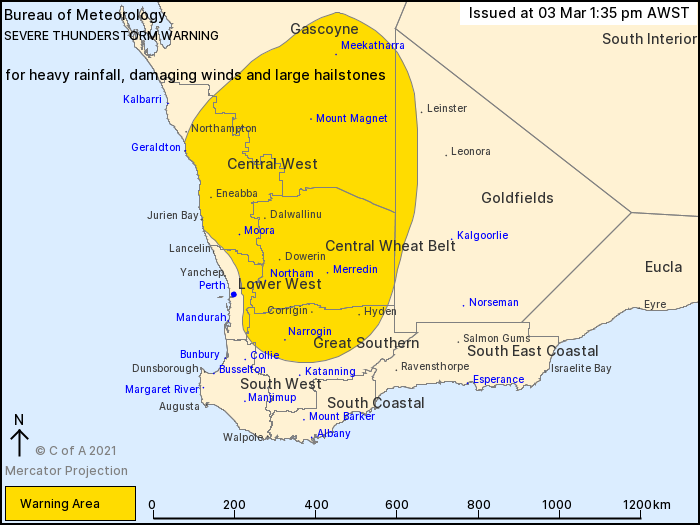