Issued at 5:53 am Thursday, 4 March 2021.
Severe thunderstorms producing heavy rainfall, with a chance of damaging winds and large hailstones.

Weather Situation: At 5:40 am WST radar imagery showed areas of active thunderstorms through the central Goldfields and through eastern parts of the Lower West and the adjacent Central Wheat Belt and Great Southern, moving towards the south. Areas of moderate to heavy rainfall is also extending into the South East Coastal district.
Severe thunderstorms are likely to produce HEAVY RAINFALL that may lead to DANGEROUS FLASH FLOODING, whilst thunderstorms over central and eastern parts of the warning area may produce DAMAGING WINDS.
Thunderstorms are likely to redevelop through the remainder of the Great Southern and southern parts of the Central Wheat Belt later this morning or during Thursday afternoon and move south into eastern parts of the South Coastal district and the South East Coastal district, with a risk of DAMAGING WINDS and LARGE HAILSTONES from these thunderstorms.
Locations which may be affected include Esperance, Kalgoorlie, Katanning, Merredin, Narrogin, Norseman, Northam, Southern Cross and Wagin.
Severe thunderstorms are no longer occurring in the Gascoyne and Central West districts and the warning for these districts is CANCELLED.
Since 9:00 am Wednesday morning the following rainfall totals have been recorded:
- Eneabba: 112mm
- Canterbury: 84.8mm
- Toodyay East: 67.2mm
- Rolling Green reported 42.8mm in the 3 hours to 5:00am WST Thursday. 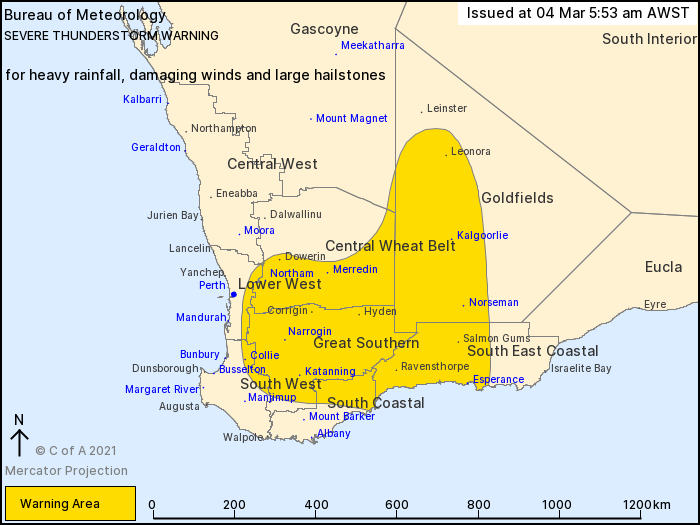