Weather Situation: At 2:00 pm WST a tropical low was located approximately 210km to the east of Coral Bay.
moving towards the south-southwest. The low is now expected remain longer over land before moving offshore near Coral Bay during Thursday morning and is no longer likely to develop into a tropical cyclone.

HEAVY RAINFALL with daily totals between 50mm and 100mm and isolated falls in excess of 250mm are possible over the western Pilbara and will extend slowly into northwestern parts of the Gascoyne during the remainder of Tuesday.Similar daily falls are likely for Wednesday and Thursday but most likely over the western Gascoyne as the low moves further to the west.

The weather system may also cause DAMAGING WINDS, averaging 50 to 60 km/h with peak gusts to 90 km/h over coastal areas between Exmouth and Gnaraloo.

A track map showing forecast movement of the Tropical Low is available at www.bom.gov.au/products/IDW60281.htm

Flood Warnings are current for the De Grey River and Fitzroy River Catchments as well as the West Kimberley District and west Pilbara rivers. A Flood Watch remains current for the Sandy Desert and Pilbara Catchments. Please refer to http://www.bom.gov.au/wa/warnings/ for further details.

Locations which may be affected include Carnarvon, Exmouth, Karratha, Onslow, Coral Bay and Minilya Roadhouse.

In the 24 hours to 9am Wednesday morning, rainfall totals below:

These locations are inland between Port Hedland and Karratha.

People in the north of WA may experience this type of weather each year at this time but winds and rain may cause damage to property and make road conditions hazardous. 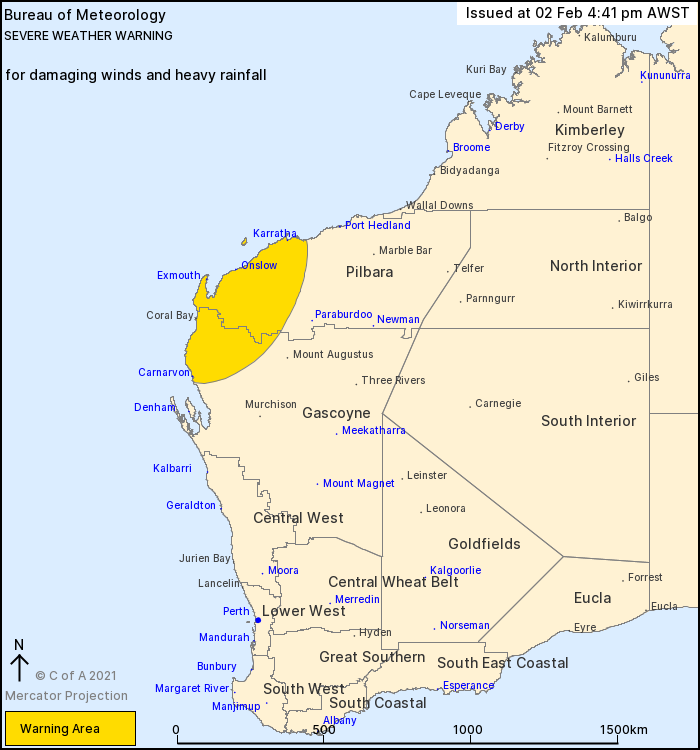