For people in South West and parts of Central West, Lower West and South Coastal districts.

Issued at 9:41 am Saturday, 6 February 2021.
A low pressure system is moving southwards off the west coast bringing heavy rainfall and abnormally high tides with damaging possible in coastal areas.

Weather Situation: At 9:00am WST Saturday 6 February, a low pressure system was located 85 kilometres southwest of Denham and 160 kilometres northwest of Kalbarri. The low will move southwards during the weekend while remaining offshore from the west coast. It is expected to lie due west of Geraldton around 3:00am Sunday and pass west of Perth Sunday evening before passing close to the Southwest Capes in the early hours of Monday morning.

The low will produce strong to gale force winds over the ocean as it moves south and gusty winds over land, with heavy rainfall only on the southern side of the system.
HEAVY RAINFALL is possible over the Central West today, extending into the Lower West this afternoon and evening, including the Perth Metropolitan area. The heavy rain will extend across the South West district early on Sunday. Daily totals of 20 to 40 millimetres are forecast with isolated falls up to 100 millimetres possible. Once the low is south of an area rainfall will ease.

Tides are also likely to be higher than predicted along the west coast north of Perth on Saturday and north of Augusta on Sunday. In these areas tides may rise ABOVE THE NORMAL HIGH TIDE MARK with ROUGH SEAS and POTENTIAL FLOODING OF LOW-LYING COASTAL AREAS with the evening high tides.

Flood Watches and Warnings are current for river catchments across the Kimberley, Pilbara, Gascoyne and Central West districts. Please refer to http://www.bom.gov.au/wa/warnings/ for further details.

Locations which may be affected include Bunbury, Geraldton, Kalbarri, Mandurah, Manjimup, Margaret River and Perth.

Rainfall to 9am WST Saturday:
Steep Point 88mm
Tamala 83mm
Carey Downs 45mm
Denham 45mm
Geraldton Airport 37mm
The Department of Fire and Emergency Services advises that people should:
* If outside find safe shelter away from trees, power lines, storm water drains and streams.
* Close your curtains and blinds, and stay inside away from windows.
* Unplug electrical appliances and do not use land line telephones if there is lightning.
* If boating, swimming or surfing leave the water.
* Be alert and watch for hazards on the road such as fallen power lines and loose debris.
* Keep away from flooded drains, rivers, streams and waterways.
* Be careful of fallen trees, damaged buildings and debris.
* Be careful of fallen power lines. They are dangerous and should always be treated as live.
* Assess your home, car and property for damage.
* If damage has occurred take photos and contact your insurance company to organise permanent repairs.
* If your home or property has significant damage, like a badly damaged roof or flooding, call the SES on 132 500. 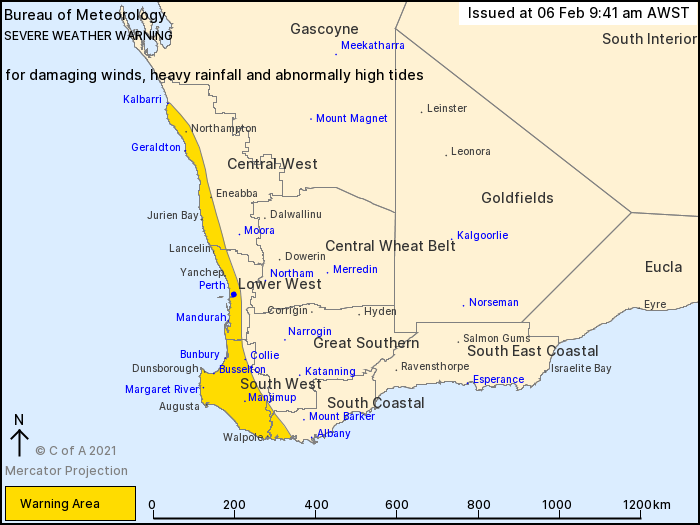