Severe thunderstorms including one that produced a tornado in Christchurch last Monday, resulting in minor damage and injuring two people in Sydenham. At 12:39pm, the Met Service NZ issued a Severe Thunderstorm Warning for the elements of Very Heavy Rain, Large hail and possible Tornadoes last Monday the 18th of November, 2019 for the Selwyn and Ashburton local government areas.

Multiple large, dangerous and damaging fire have occurred and are still ongoing. Residents away from the battlefield would be well accustomed to the daily smoke intake for households across the region.Severe thunderstorms were tracking to the east-northeast and were expected to lie near Rakaia and Chertsey at 1:07pm with the Met Service updating the warning to include Selwyn, Waimakariri and Christchurch City at 1:12pm. Half-an-hour later the tornado touched down near Sydenham in the city of Christchurch from approximately about 1.45pm to 2:00pm accompanied by strong wind gusts, large hail stones and very heavy rainfall.

The official Met Service NZ weather station at Christchurch Airport (located approx. 14km away from the suburb of Sydenham), received a peak wind gust reading of 57km/h around the same time as the tornado occurrence, however unfortunately this was quite an inaccurate representation of the true wind speeds from near the centre of the thunderstorm complex at the time. The FENZ (Fire and Emergency Service NZ) southern communications centre received about twenty-five weather-related callouts between the period of 2:00pm and 3:00pm as the thunderstorm affected and cleared out of the Christchurch area.

After the front moved offshore, eyewitness accounts of waterspouts were reported about the bay areas off to the northeast of the city of Christchurch. By 4:20pm, the Met Service NZ confirmed the tornado occurrence, partly due to visual confirmation from images submitted via twitter and video from various other social media sources from the community.

According to the NZ Met Service, the November 18th, 2019 Christchurch tornado only reached EF0 on the Enhanced Fujita Scale, a global scale used to measure the intensity of tornado. The ?EF scale? ranks tornados from zero to five based on the wind gusts and the level of destruction it is expected to deliver. EF0 was the weakest on the scale with gusts of 104km/h to 136km/h estimated, and five the strongest with gust over 321km/h.

Generally, tornadoes for New Zealand form, but not always, associated with prefrontal squalls, bands of thunderstorms and/or isolated supercell thunderstorms. On average about seven to ten moderate to strong tornado events occur annually and usually track only for a couple of kilometres over a short duration of time. Tornadoes can blow out windows, lift roofs, break large branches off trees, generate dangerous flying debris and blow vehicles off the road and this why it is imperative to listen and follow all warnings and alerts issued via the Met Service NZ relating to any severe weather threats.

Image: Anatomy of a tornado funnel via the NZ Met Service. 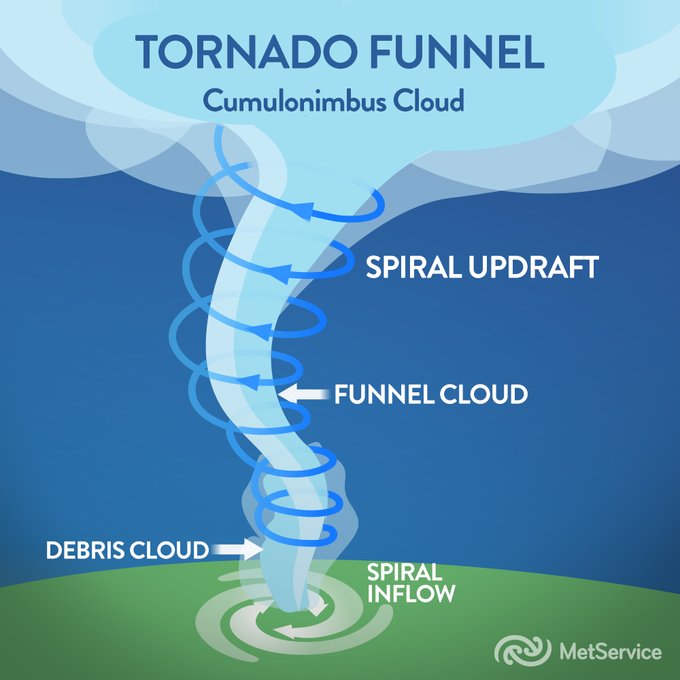