For people in parts of Blue Mountains/Hawkesbury, Sydney and Wollondilly/Wingecarribee areas.

Weather Situation: Severe thunderstorms with possible large hail west of Sydney.
The Bureau of Meteorology warns that, at 10:15 pm, severe thunderstorms were detected on the weather radar near Campbelltown, Leppington, Maroota and Minto. They are forecast to affect Camden, Cobbity, Narellan, Oran Park, Menangle and Wedderburn by 10:45 pm and Richmond, Upper Colo, Wilberforce, Windsor and Douglas Park by 11:15 pm.

Damaging winds, large hailstones and heavy rainfall that may lead to flash flooding are likely.
The State Emergency Service advises that people should:

* Move your car under cover or away from trees.
* Secure or put away loose items around your house, yard and balcony.
* Keep at least 8 metres away from fallen power lines or objects that may be energised, such as fences.
* Report fallen power lines to either Ausgrid (131 388), Endeavour Energy (131 003), Essential Energy (132 080) or Evoenergy (131 093) as shown on your power bill.
* Keep clear of creeks and storm drains.
* Don't walk, ride your bike or drive through flood water.
* If you are trapped by flash flooding, seek refuge in the highest available place and ring 000 if you need rescue.
* Unplug computers and appliances.
* Avoid using the phone during the storm.
* Stay indoors away from windows, and keep children and pets indoors as well.
* For emergency help in floods and storms, ring the SES (NSW and ACT) on 132 500. 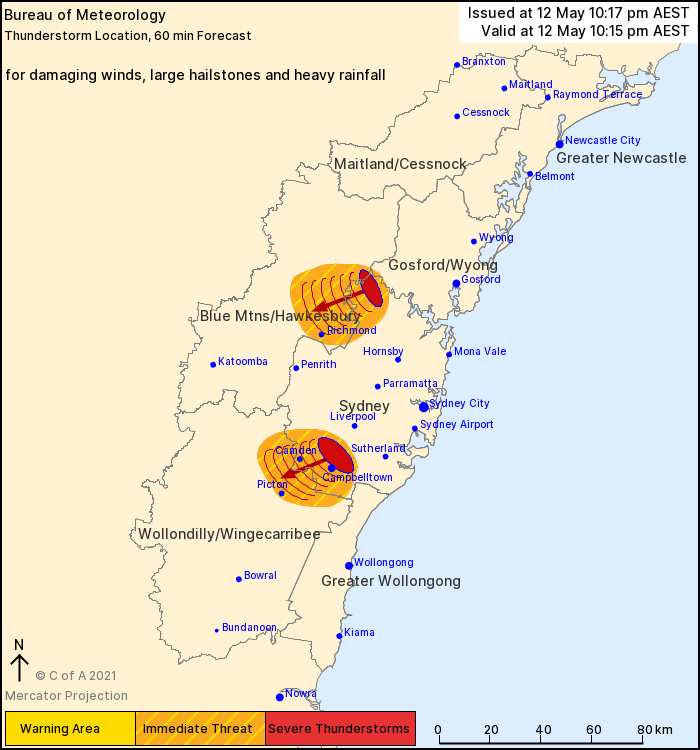