Headline:
Weather conditions will change rapidly near the west coast on Sunday as Seroja accelerates into the coast between Carnarvon and Jurien Bay.

Tropical Cyclone Seroja has slowed and is beginning to turn towards the coast.

Seroja will continue to intensify today as it begins to move south possibly reaching Severe Category 3 tonight. During Sunday the system will accelerate towards the coast weakening back to Category 2 intensity as it approaches the central west coast.

The cyclone should gradually weaken as it moves inland on Monday but is still likely to be causing gusty winds east and north of the track as it crosses over the south of the state.

Hazards:
GALES with gusts to 100 kilometres per hour are likely to develop in an area between Coral Bay and Kalbarri during Sunday afternoon and extend further south towards Lancelin and inland into the Gascoyne and northern Wheatbelt later Sunday and then further inland to the southern Goldfields during Monday.

DESTRUCTIVE WINDS with gusts to 150 kilometres per hour are forecast to occur closer to the centre of Seroja as it moves across the coast and into adjacent inland parts.The most likely area to experience destructive wind gusts is on the coast between Geraldton and Denham.

Seroja will be moving fast, so weather conditions will deteriorate rapidly as it approaches.

HEAVY TO INTENSE RAINFALL and FLASH FLOODING are likely close to the track of Seroja during Sunday and Monday.

ABNORMALLY HIGH TIDES could cause minor inundation at the coast between Coral Bay and Lancelin, increasing to SERIOUS FLOODING in the Denham and Shark Bay region and possibly near Kalbarri.

Communities between Coral Bay and Lancelin should listen for the next advice. 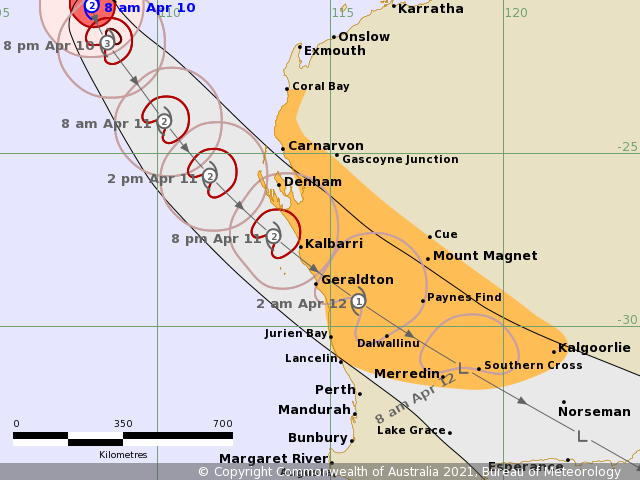